Slate has some images from photographer Liron Shimoni’s new series White Shadows. Albinism occurs at a far higher rate in Tanzania than the rest of the world and people who have it can be subject to discrimination, abuse, or murder. From the text that accompanies the photographs:

“In the villages, they are viewed as demons or subhuman, and called offensive terms such as ‘zero-zero’ or ‘white meat.’ There is also a widespread belief that getting close to an albino will result in the catching of the disease, or that a pregnant woman who has physical contact with an albino will then birth an albino baby of her own.”

Médecins Sans Frontières/Doctors Without Borders (MSF) will stream their Scientific Day conference live at no charge this Friday [watch here].  The conference takes place in London but they have also published a schedule in Eastern Standard Time.

Highlights of this year’s conference include:

Viewers can use the Twitter #MSFSci hashtag to participate during the event on Friday and follow @MSF_UK for more info. The video archive from last year’s event can be found here on Vimeo.

In the debate over how to improve health care in the US, systems in other countries are often held up as models.  You know, countries like Rwanda.

A thought provoking piece yesterday on The Atlantic made that comparison, citing analysis by Dr. Paul Farmer.  From the article:

Over the last ten years, Rwanda’s health system development has led to the most dramatic improvements of health in history. Rwanda is the only country in sub-Saharan Africa on track to meet most of the Millennium Development Goals. Deaths from HIV, TB, and malaria have each dropped by roughly 80 percent over the last decade and the maternal mortality ratio dropped by 60 percent over the same period. Even as the population has increased by 35 percent since 2000, the number of annual child deaths has fallen by 63 percent. In turn, these advances bolstered Rwanda’s economic growth: GDP per person tripled to $580, and millions lifted themselves from poverty over the last decade.

One explanation for this dramatic improvement is that the genocide in Rwanda allowed for a clean slate upon which a new program could be built.  Farmer and others reject this explanation, however.  A recent report focuses more on interdepartmental coordination and central planning with health as a priority.  The article is a good summary and the BMJ research paper with Farmer as lead researcher has more details.

The Atlantic had two good articles out over the winter break that I’m just getting to now; I’m posting them here not because they’re extraordinarily well-written or insightful, but because they’re about topics that deserve greater attention.

The first considers leprosy and the difficulty of eradicating a disease.  In medical anthropology class, I had mentioned that in human history we have successfully eradicated only one disease (of humans) globally: smallpox.  Given our resources in global health in the 21st century, why is it so hard to accomplish the eradication of disease?

Leprosy is a good example of how hard this push can be.  It’s hard to study and the routes of transmission aren’t that well understood (not unlike its close relative, Buruli ulcer).  Worse, it develops very slowly, is easily misdiagnosed, and treatment efficacy is limited.  And social stigma, although its role can easily be exaggerated (something we’ll be thinking about in class), has also played a significant role in rendering the disease and its victims invisible.

The second article concerns a topic that badly needs more discussion: the astounding lack of qualified medical personnel to treat sub-Saharan African populations (the article references a study that finds 9 surgeons per 6,000,000 people in Sierra Leone; I would guess that this is only slightly lower than the West African average).  The results are predictably horrific: inadequate care, malpractice by the undertrained and/or under-equipped, and a system that has little power to retain the qualified.  It’s not a perfect article, but I’m glad that it does two things beyond simply raising the subject: it references Paul Farmer and Jim Kim’s paper on the need for surgeons in the developing world; and it mentions that half of US foreign aid in global health goes to getting ARVs for the HIV+, but a negligible amount goes to training qualified surgeons in poor countries.  Many doctors I work with themselves note this strange disparity between funding and the most pressing medical needs.

I’ve gotten so used to Benin getting totally ignored (or when it is mentioned in world media at all, getting reduced to a few tired stereotypes) that I didn’t have high hopes for this documentary about one of my favorite topics: the increasingly collaborative relationship between traditional healers and doctors.  But it’s actually really good!  This video is part of a campaign to raise awareness and funds for badly needed vaccines in the country.

Two occasions of mysterious illnesses among girls: culture bound syndromes?  The first is a Radiolab podcast about an 1962 outbreak of contagious laughter in Tanzania and the second is a  New York Times Magazine article about a group of girls from Le Roy, New York (near Rochester).

The Mystery of 18 Twitching Teenagers in Le Roy 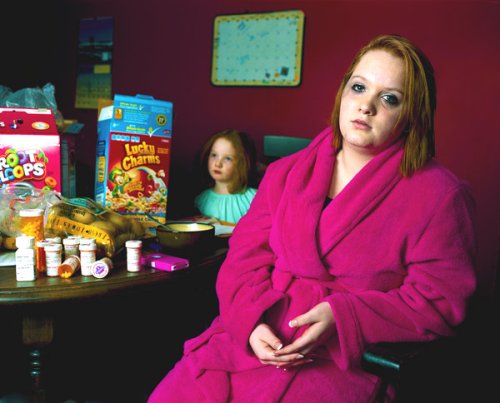 Lydia Parker, foreground, at home with her sister. She got one of the bruises on her face when an uncontrollable tic caused her to hit herself with her cellphone.
(c) Gillian Laub/The New York Times

Matt K. shared this article during the Winter 2012 semester class, wondering if this is an example of a culture-bound syndrome: Mysterious nodding disease debilitates children

“A sufferer of Nodding Disease is put in a child’s crib at Antanga Health Center, Uganda, so that he doesn’t injure himself. The affliction is associated with violent epilepsy-like convulsions that can lead to permanent disabilities.” – CNN